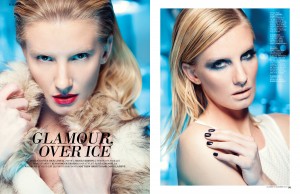 What happens when you put the creative genius of fashion photographer and Orange County Center for Photography and Digital Arts teacher, Nick Lovell, together with a half-ton of ice, a 70-200 mm Canon lens locked to a Mark II, and a dazzling model with a team of people who know how to get it done?

You get Glamour, Over Ice, a stunning beauty project that the prestigious Elléments Magazine featured in their November issue (see http://bit.ly/19qplJu).

It goes without saying, but we will say it anyway— Congratulations to Nick Lovell and his team on the excellent, inspirational work!

Elléments Magazine is a thematic publication devoted to fashion and beauty. The key term is ‘thematic’, which means developing a project around a concept, wherein a photographer presents textural and contextual visual information as fashion art, and that he or she finds the tools and process to bring the concept to life. Nick’s project was not an accidental ‘happening’ but a well-executed creative plan, one that calls upon the photographer to master several disciplines: designer, director, and leader of the creative team.  Recently I was able to catch up with Nick, and ask him to share how Glamour, Over Ice became reality.

Bob.  How did you first conceive of this glamour layout and your styling approach?

Nick. I’ve had this idea rattling around in my head for a long time. Highly conceptual ideas, I have tons of them that I keep track of in a big notebook. I fill the pages with sketches, word impressions, notes from other shoots that I have seen or created— a general conflagration of data that means a lot to me. But the ice concept fascinated me and it finally fit a particular time in my shooting production budget schedule.

Bob. Why did you choose the blue ice background, how many tons of ice did you have to use, and why ice as a formula component?

Nick. The concept was always to have a wall of ice behind the model, as if she were in an ice palace out in the middle of Siberia or the Arctic. I looked into several different artificial ways to create the ice, but they all ended up being more cost-prohibitive than just using the real thing.  We used fifty 25-pound ice blocks, which totals over half a ton of ice.  The trick was, I was expecting perfectly smooth cubes of ice, but when they arrived, they were all different shapes and sizes!  David LaNeve from The Center was instrumental in engineering a platform for the ice, and also sculpting all the individual pieces so they would fit together to form a wall.  I’m a big fan of bold colors in my work, and blue is my favorite.  So it just made sense to make the ice a bright blue!

Bob. Discuss with us the staging— lighting, camera use, the glamour team for the model operations.

Nick. I shot these on a Canon 5D Mark II with a 70-200mm f/2.8L.  I love the 70-200s, and usually shoot with the f/4 version when I’m shooting beauty.  For me, shooting at anything wider than an f/5.6 reduces the depth of field too narrowly. I prefer to have all the planes of the face in focus as much as possible.  I’m a huge fan of Profoto, and their beauty dish is probably my favorite modifier – it clearly is an industry standard for a reason.  I used two beauty dishes, one silver above and one white below.  The white had a blue gel on it so that the fill light would be blue, giving an even colder feel to the look.  The background light was just one light with a standard reflector and a blue gel, pointed directly at the ice.  Longtime friend and fellow artist, Matthew Griffith, assisted in the lighting plan which is critical in a shoot of this type.

Fashion photography is rarely just one person with a camera; it’s the work of an entire team.  I was fortunate to have a top-notch “glam squad” and awesome people assisting.  Kevianno Guerrero did a fantastic job with the makeup looks, and Alicia Zavarella delivered flawless hairstyles.  I had worked with both of them before, and I have celebrity makeup artist Angela Peralta to thank for bringing them in for this shoot, and introducing me in the first place.  I also got to work with an awesome stylist, Cat Li.  Even though this shoot was primarily for “beauty” (i.e. makeup and hair), good wardrobe is key to any fashion shoot, and she brought some beautiful pieces to the table.

Bob.  Obviously, the choice of model was critical to executing your vision. How did you make this choice and why?

Nick. I was looking for a fair-skinned model with a striking bone structure, Nicole Kristin was my first choice, and I was so glad that we were able to work together.  I primarily use LACasting.com to cast models if they’re not sent to me directly from an agency, which is how I found Nicole. Nicole’s portfolio demonstrated her native beauty, but equally important is that she could emote in front of the camera, which made her a natural for this project.

Bob. Share with us the how of Elléments Magazine and the publishing arrangement. 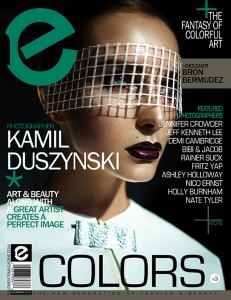 Nick. Elléments Magazine is an awesome submission-based publication that I came across a while back, and I was really impressed by their aesthetic sensibility.  The work that they publish includes photos that are very graphical and stylized, which is right up my alley.  Their November Issue theme was “Color and Fantasy,” and I was blown away by the amount of talent and amazing imagery in that issue.  The other photographers featured were spectacular.

Bob. How does a project like this advance one’s career?

Nick. “Tear sheets,” or examples of published work, are always great for a photographer’s portfolio.  They lend a photographer credibility since someone else had to choose your work for publication.  There are a set of requirements and steps you need to go through for your work to be published, so a potential client seeing that you’ve done it and understand the lay of the land gives them the confidence that you know what the requirements are.  Editorial work can also be a great way for a photographer to express him or herself; depending on your relationship with the art directors and fashion editors of the publication, you sometimes can have a good deal of creative freedom.

Bob. How does your fashion work tie to or offset your video work?

Nick. Motion pictures involve movement, which means that you’re not necessarily looking for that one perfect image, but you’re looking for a way to make a long series of images that all work together.  In still photography you are capturing just one moment, as opposed to showing the passage of time, so you can focus in on that one exact moment, that one gesture, that look in the eyes.  I enjoy the perfectionist aspect of that.  It’s impossible to focus that much on a single frame in video (because there are at least 24 of them being shot per second!), but the trade-off is that you get to play with time, with action and motion.  Video is becoming an ever more important medium for photographers, and short “fashion films” are becoming a bit like music videos from the late 1980s and early 90s; short experimental art films that give the director and artist a way of pushing the boundaries of video as a medium.  In fact, my long-time collaborator and cinematographer, Matthew Griffith, brought along a Sony F65 Cinema camera to this shoot, so we also got some motion shots.  We’ll be cutting them together into a fashion video soon.

Bob. How would you describe your personal fashion philosophy and fashion project objectives?

Nick. What excites me about fashion is the building of a world of fantasy.  The work that excites me is stuff that doesn’t look too much like our own reality, but takes us to an entirely new place.  We’re constantly looking at reality, so why not try to transcend it?  I have a perfectionist streak in me, so the idea of constructing a perfect world with idealized beauty is hugely satisfying.  The main objective of any fashion project, I think, is to create that world in a way that it’s “aspirational.”  In other words, you want people to want to live in that world, and (this is where the selling part comes in) feel like, if they wear that garment or use that product, they’ll feel like they’re a part of that fantasy, even if it’s just subconsciously.  Balancing the art with the commerce is a complex and multi-layered process, but it’s a challenge that is highly appealing to me.

Bob. As a teacher, how do you translate this experience into techniques, personal visual growth, and career path objectives for your students?

Nick. In my Fashion Classes at The Center, I start with my basic philosophy about fashion imagery, and demonstrate how this translates into the imagery used and demanded by the fashion industry.  With that as a background, I take students through the entire process of a fashion shoot, from conceptualizing and building a personal vision, to balancing that with client needs and expectations, and then on to creative lighting, working as the leader of a team, and how to work with models.  I often say that my approach to teaching fashion is “holistic” in that I don’t just say, “here are some pretty people, some pretty lighting, go ahead and shoot it.”  Then you’ve just learned one or a few very specific setups that will work for those specific situations, without the underlying decision-making process that allows you to apply it to other situations.  I’m very interested in making sure that students understand the “why” of what they’re doing instead of just the “how,” which is a philosophy I incorporate into all the classes I teach.

Bob— My thanks to Nick Lovell and his team for an excellent and inspirational project.